Oppenheimer analyst Jason Helfstein weighed in with a caution stance on shares of Zillow Group Inc (NASDAQ:Z), as decelerating traffic trends suggest caution around potential ARPA increases in 2016. The analyst maintained a Market Perform rating on Zillow shares, without providing a price target. Zillow shares are currently trading at $85.71, down $0.62 or 0.72 percent.

Helfstein noted, “We believe 2016 Street revenue could be overly aggressive or Z will be forced to spend more on marketing, resulting in disappointing margins. Per comScore, 2Q minutes are trending +3% y/y vs. +5% in 1Q and +30% in 4Q. To combat lower traffic, mgmt will likely need to increase advertising, or test new products, at the expense of margin. Given lack of visibility around KPIs, such as agent/ARPA, we are introducing a media model, based on revenue/hour. While our analysis suggests upside to 2Q/FY guidance, we see slowing usage as a long-term drag. Our ’16E revenue/EBITDA now 5%/4% below the Street.”

According to TipRanks.com, which measures analysts’ and bloggers’ success rate based on how their calls perform, analyst Jason Helfstein has a total average return of 9.2% and a 53.9% success rate. Helfstein is ranked #390 out of 3629 analysts.

Out of the 14 analysts polled by TipRanks, 7 rate Zillow stock a Buy, 6 rate the stock a Hold and 1 recommends Sell. With a return potential of 32.1%, the stock’s consensus target price stands at $114. 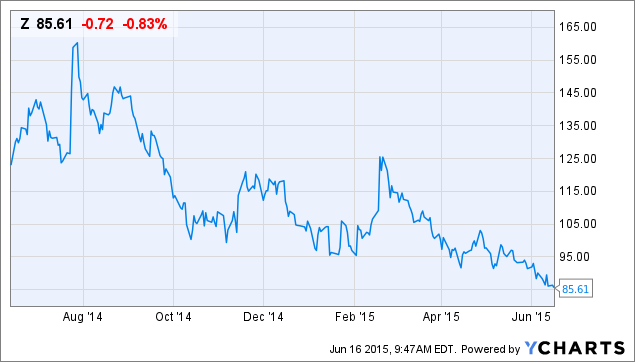