Nutanix Inc (NASDAQ:NTNX) shareholders should be smiling today as the data center hardware firm reported a strong April quarter ahead of expectations, with equally encouraging sales guidance despite persistent gross margin challenges due to DRAM pricing. As of this writing, Nutanix shares are rising nearly 11% to $19.53.

Overall, Oppenheimer analyst Ittai Kidron came away with increased confidence in Nutanix’s long-term growth prospects and its ability to quickly adjust to market dynamics. While modeling ongoing margin headwinds, Kidron sees eventual easing as a source of both top- and bottom-line upside.

As such, Kidron reiterates an Outperform rating on Nutanix shares, with a price target of $34, which represents a potential upside of 77% from where the stock is currently trading.

Earlier today, Maxim analyst Nehal Chokshi reiterated a Buy rating on NTNX stock, with a price target of $41, which implies an upside of 108% from current levels.

Chokshi wrote, “Management has stated the company will begin ramping spending on opex again now that large deal closure cadence is back on track. As such, we are raising our FY18 opex estimate from $755M to $824M and we are also slightly reducing our GM estimate from 60% to 58.5%. As we model returns on the deployment of the incremental capital to take one year, we are reducing our FY18 net income estimate from ($143M) to ($229M). Additionally, as we expect new software relationships to kick in, we are modelling deferred revenue build up to accelerate in FY19, resulting in our FY19 FCF estimate being relatively unchanged at $108M. Given the bulk of our DCF derived price target emanates from FY19 to our terminal period, our 12-month price target of $41 remains unchanged with the key input being a 28.7% Sales & marketing productivity ratio from FY20 to FY29, rendering a terminal period revenue of $8.2B and FCF of $1.2B.”

Overall, out of the 17 analysts polled by TipRanks (in the past 12 months), 11 rate Nutanix stock a Buy, 5 rate the stock a Hold and 1 recommends to Sell. With a return potential of 65%, the stock’s consensus target price stands at $31.80. 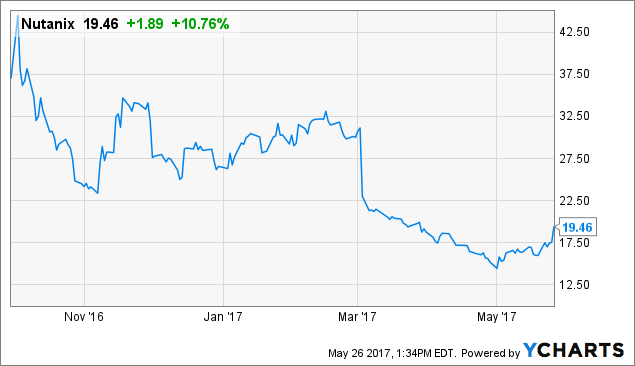