Oppenheimer analyst Jason Helfstein came out today with a research note on Zillow Inc. (NASDAQ:Z), as the company announced FTC approval of the Trulia acquisition. The company also reported its fourth-quarter results, posting revenue that was 3% above both Oppenheimer and Street estimates. However, EBITDA was 9% below management guidance on higher Tech and G&A costs. The analyst rates the stock a Perform, without suggesting a price target.

Helfstein noted, “Top-line beat driven by pricing and higher mortgages revenue, as consumer loan requests grew +66% y/y vs. +18% in 3Q. Real Estate revenue, +75% y/y, a 1,200 bps deceleration from 87% in 3Q. The Real Estate deceleration is the result of weaker net subscriber adds, -60% y/y and the lowest absolute number since 4Q:11. However, subscriber pricing is still strong, +32% y/y, the same as 3Q, and higher than +20% in 2Q and +10% in 1Q, respectively. We believe weaker net adds and higher Opex could be related to the acquisition. We expect the company to provide more detail and/or timing of pro forma 4Q results and FY15 guidance during the call. As such, our model and estimates are under review.”

According to TipRanks.com, which measures analysts’ and bloggers’ success rate based on how their calls perform, analyst Jason Helfstein has a total average return of 5.0% and a 52.0% success rate. Helfstein is ranked #808 out of 3476 analysts. 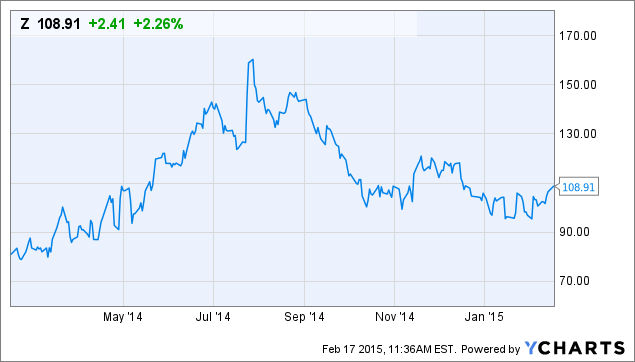