Oppenheimer Reiterates Outperform On Shares Of Dyax, Raises PT To $14

Oppenheimer analyst Akiva Felt reiterated an Outperform rating on Dyax Corp (NASDAQ:DYAX) and slightly raised his price target to $14 (from $13).

Felt noted, “Dyax reported better than expected 3Q14 revenues and EPS of $22.0M and ($0.01) compared to our estimates of $16.0M and ($0.06). The beat was driven by strong Kalbitor sales of $20.2M (vs. $13.5M est.), which appears to be a mix of growing demand and underlying fluctuation in utilization patterns. Dyax also booked $0.7M in royalties from initial sales of Cyramza (LLY), the first approved drug from the LFRP program. We’re encouraged to see the “base” business acting well ahead of the DX-2930 Phase 1b data expected in early 2015, which remains the key near-term catalyst for DYAX shares and the crux of our Outperform thesis. We are updating our estimates and PT following the 3Q results.”

According to TipRanks.com, which measures analysts’ and bloggers’ success rate based on how their calls perform, analyst Akiva Felt has a total average return of 57.8% and a 66.7% success rate. Felt is ranked #28 out of 3350 analysts. 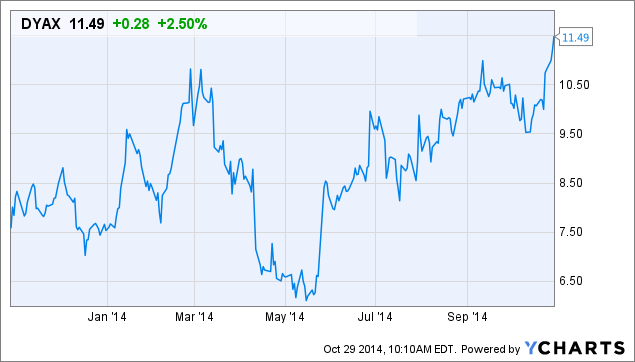