In a research report published Wednesday, Oppenheimer analyst Christopher Marai maintained an Outperform rating on Sarepta Therapeutics Inc (NASDAQ:SRPT) with a $45 price target, which represents a potential upside of 218% from where the stock is currently trading. The report follows the news that the company's CEO Christopher Garabedian has resigned. The CMO Dr. Edward Kaye was appointed interim CEO.

Marai noted, "SRPT noted that eteplirsen's regulatory and clinical plans remain on track. Recall that concerns regarding handling of regulatory interactions have put into question Garabedian's outsized efforts to get drug to patients as rapidly as possible. It is our view that Chris Garabedian potentially may have agreed to step aside to put eteplirsen in the best possible light with regulators. We also acknowledge that his efforts at SRPT have helped shift both regulatory and investor discussion in a net positive direction since he joined as CEO." 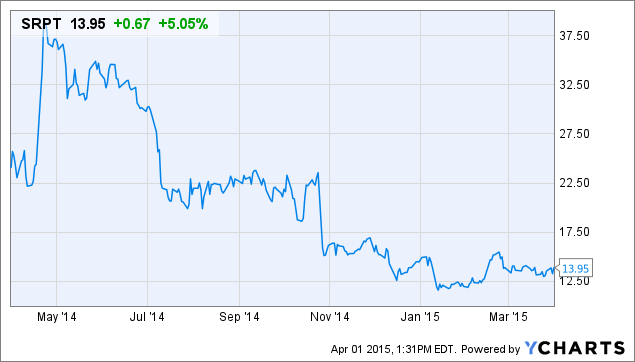