Oppenheimer analyst Rohit Vanjani reiterated an Outperform rating on Opko Health (NYSE:OPK) with a price target of $12, which represents a potential upside of 41% from where the stock is currently trading. The report follows the company’s third-quarter results and update on its pipeline.

Vanjani noted, “The 4Kscore test has made good strides since the end of June, likely at least doubling the number of tests ordered Q/Q, launching ex-US in Spain in September, and garnering CPT code issuance from the AMA. Management continues to believe that test will be broadly available in 2015 with the potential for a breakout year. The other major drivers of our valuation, Claros 1, Rayaldee, and hGH-CTP, appear to be on track, with a slight delay noted in the Claros 1 program. Additionally, OPKO anticipates receiving a milestone from Tesaro in 4Q on the order of $5 million due to progression in the Rolapitant program. We continue to view royalties from Rolapitant sales as upside.” 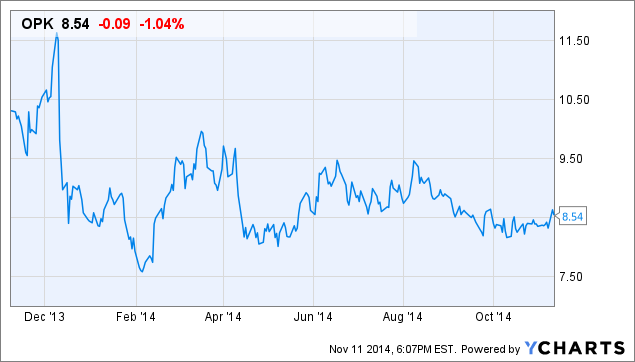