Oppenheimer analyst Akiva Felt joined the crowd today, reiterating an Outperform rating on Cubist Pharmaceuticals (NASDAQ:CBST) while also, surprisingly, keeping his price target at $83, as multiple news outlets reported that Merck is nearing an ~$8B takeover of CBST.

Felt wrote, “As we’ve stated previously, a deal for CBST makes a lot of sense given the operating leverage potential and the need for a large European build-out to launch Zerbaxa. Merck is an appropriate suitor, in our view, as would other strategic (i.e., big-pharma) or financial (i.e., spec-pharma) suitors.”

The analyst added, “While the reported “about” $100/sh takeover price is a nice premium, we think MRK could justify closer to $110 a share. The timing of the news is somewhat puzzling given the pending Cubicin patent litigation ruling, but all the pieces are there to believe the news reports, in our view.” 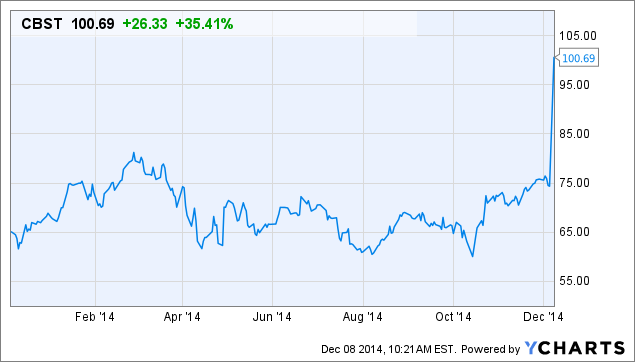