In a research report released Monday, Oppenheimer analyst Rupesh Parikh maintained an Outperform rating on Amira Nature Foods Ltd (NYSE:ANFI) with a $17 price target, which represents a potential upside of 20% from where the stock is currently trading. The report comes after the company released its its fiscal 2015 full year and fourth quarter ended on March 31, 2015. Amira Nature’s adjusted EPS increased 11.5% to $0.52 from $0.47 in the prior year, ahead of a consensus forecast of $0.49. Better than expected revenues and lower expenses offset lower gross margin and a higher interest expense, according to the analyst.

Parikh wrote, “We have spent more time reviewing ANFI’s quarter. Clearly, top-line momentum remains healthy even with a more challenging deflationary backdrop. Commentary suggests lower prices are helping to drive better demand and even trade-up from consumers. Initial FY15 (Mar. 2016) guidance was also above underlying investor expectations and likely represented a key driver of the 20%+ move higher in the shares in recent days. We spent time revisiting our financial model and are making no changes to our full-year EPS forecasts. We have built in 1H15 conservatism to reflect a potential negative impact on margins from deflationary pressures. We believe more specifics on financing plans/processing center could represent the next catalyst for ANFI.”

Out of the 3 analysts polled by TipRanks, two rate Amira Nature Foods stock a Hold, while one rates the stock a Buy. With a return potential of 17.7%, the stock’s consensus target price stands at $16.67. 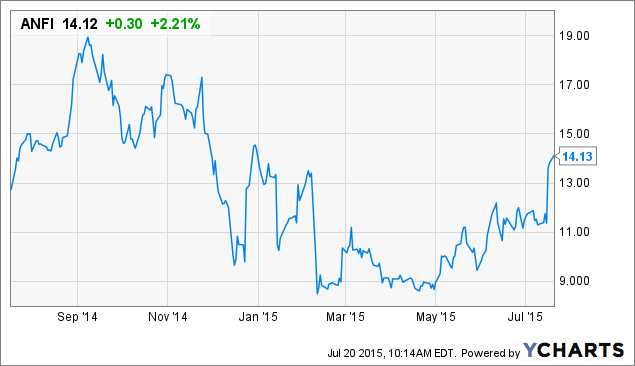