In a research report issued today, Oppenheimer analyst Akiva Felt reiterated an Outperform rating on Cubist Pharmaceuticals (NASDAQ:CBST) with a price target of $83, as the company reported stronger than expected 3Q14 revenue and adjusted EPS of $309.2M and $0.58 vs. Oppenheimer’s estimates of $300M and $0.44 and consensus of $307M and $0.38, respectively.

Felt noted, “The beat was driven by upside from US Cubicin revenues as well as meaningfully lower R&D spend due to timing of clinical trial expenses. We’re encouraged by the financial performance but remain focused for the near term on the initial momentum of Sivextro and the upcoming approval of Zerbaxa (formerly CXA-201) in December. We are adjusting our 2014 estimates per management commentary and introducing 2016 estimates.”

The analyst concluded, “Busy 4Q14 ahead, with an expected ruling in the Hospira litigation over Cubicin, initial market feedback on Sivextro, and FDA approval of Zerbaxa, the new brand name for CXA-201, for gram-negative cUTI and cIAI infections (Dec. 21 PDUFA).” 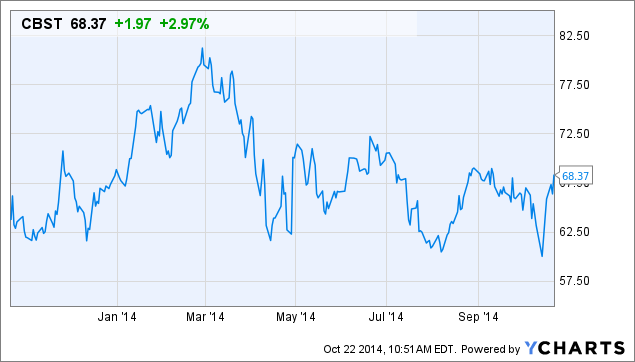