Christopher Marai of Oppenheimer is optimistic going into the Dystrophin Methodology Workshop on March 20, which will be hosted by the FDA-NIH. Subsequently, the analyst reiterated an Outperform rating on Sarepta Therapeutics Inc (NASDAQ:SRPT) with a price target of $45, in hopes that the upcoming workshop may improve the possibility of eteplirsen receiving expedited approval. Eteplirsen is a drug in Sarepta’s pipeline that targets Duchenne muscular dystrophy.

Marai explained that the event, which will be webcasted, may “may help put the possibility of an expedited approval of eteplirsen into context.” He views the event as a “neutral-to-positive” for the pharmaceutical company. Although the event “may not relate” to potential accelerated approval for eteplirsen, the analyst does expect clarification on “standards for approval of follow-on compounds.”

The analyst added, “We highlight the eteplirsen accelerated-approval thesis hinges on acceptance of a dystrophin surrogate together with preliminary clinical data” and noted that about $20 of his $45 price target is contingent upon the drug’s accelerated approval. Furthermore, Marai outlined potential upcoming milestones for eteplirsen, estimating that it will be fully approved in 2017.” 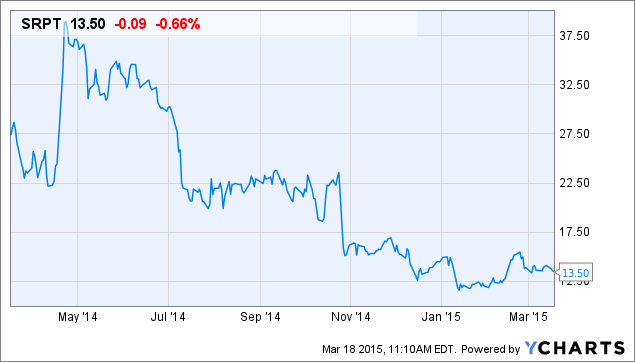