Oppenheimer analyst Steven Lichtman reaffirmed an Outperform rating on Integra Lifesciences (NASDAQ:IART) with a $57 price target, which represents a potential upside of 15% from where the stock is currently trading.

Lichtman said, “Third-quarter 2014 sales came in slightly lower on Spine; higher gross margin offset for a $0.02 beat. IART also announced it will spin off its Spine business in a transaction that will move IART’s spine hardware and orthobiologics businesses into a separate company called SeaSpine. New-IART will focus on its leading franchises in specialty surgical, wound care and extremities. We expect the deal to be accretive to both sales growth and operating margin for IART. It should also prove to be beneficial for the new SeaSpine business, which will be able to reinvest more as a standalone than it has under IART. Mgmt reiterated its margin expansion goals—23-24% EBITDA margin by 2018 from 20% today.” 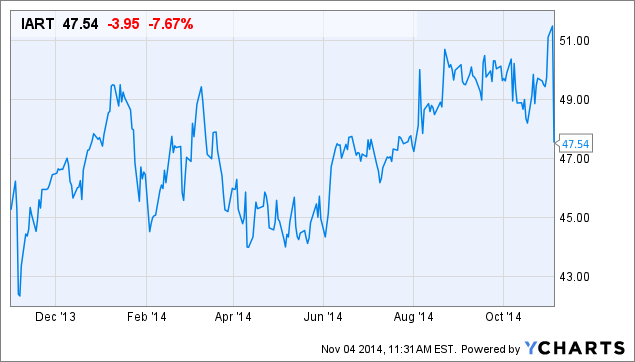 These 2 Penny Stocks Are Well Positioned for Gains, Say Analysts