Andreeva wrote, “Rayden, 65, has been involved with the company for over 19 years, and was instrumental in Justice reaching No. 1 market share in tween space (strong fashion/value proposition). During his tenure, Justice’s profitability improved from breakeven (at the time of ’09 acquisition) to over 13% EBIT margin by 2012. Lately, however, business has been challenged, with slowing comps (-10% in most recent 4Q14) and sharply declining margins (EBIT margin down >600 bps in 2014) with weary consumer, changing competitive landscape and increasingly promotional environment. Rayden remains in place until January, and company has begun to actively look for successor.”

The analyst continued, “Scott Bracale, president of Agency, has been with the company over 16 years; presented to investors at the past two ASNA Investor Days. Lece Lohr, Chief Merchandising Officer, has over 13 years of experience at ASNA– merchandising/planning teams have already completed holiday buys (shouldn’t be risk to holiday from product execution standpoint, recent fashion looks strong) and are now working on spring/summer ’15. CFO of Justice, Rolando De Aquiar, has been at Justice for over six years of experience. While ASNA now has two key roles this year, company has been making progress with the CFO search–we believe new hire will likely start early next year, if not sooner.” 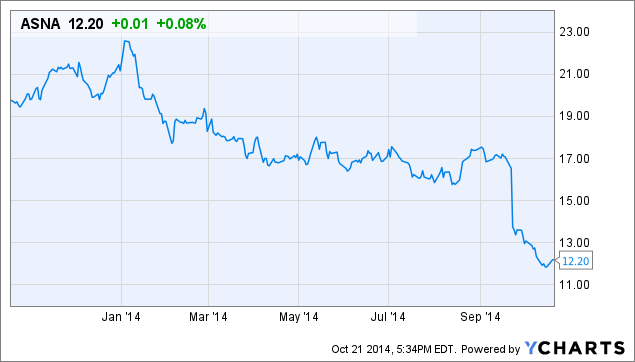