Oppenheimer analyst Brian Bittner weighed in with a few insights on Sonic Corporation (NASDAQ:SONC) after the company reported fiscal second-quarter earnings results that topped the Wall Street analyst consensus. The analyst raised the price target to $40 (from $38) while reiterating an Outperform rating on the stock. Despite the increased price target, shares of Sonic closed today at $32.10, down $4.56 or 12.44 percent.

Bittner noted, "SONC remains a top-tier Outperform-rated stock, and a strong quarter was accompanied by an EPS raise (to +25-27% YoY). Still, the refreshed outlook has conservative elements giving a beat-and-raise bias to the rest of '15. We remain encouraged by SONC's ability to significantly raise AUVs and are attracted to its unique operating leverage and outsized FCF use."

Furthermore, "Our new $40 price target is 14x '16E EBITDA. This model possesses impressive momentum ahead of upcoming benefits from digital menu boards. Top 20% of system has $1.8M AUVs vs. $1.2M system average, so upside potential in the system is massive." 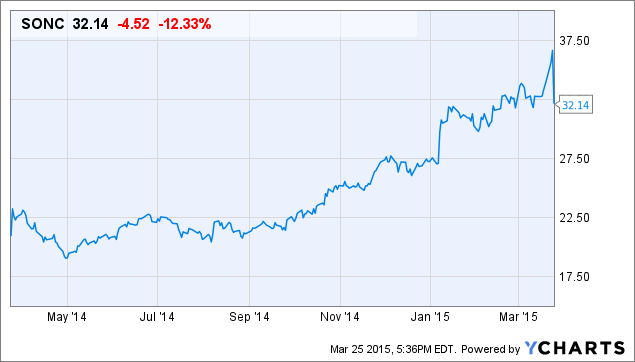 We Recommend Taking Advantage of Sonic Corporation Shares Under $30: Oppenheimer