Oppenheimer analyst Akiva Felt maintained an Outperform rating on Neuroderm (NASDAQ:NDRM) and slightly raised his price target to $19 (from $18), which implies an upside of 38% from current levels.

The report follows last week’s news of positive pharmacokinetic (PK) and safety/tolerability data for the company’s ND0612H from a small Phase 2a study in severe Parkinson’s disease (PD) patients.

Felt noted, “Observed plasma dopamine levels suggest that ND0612H can provide comparable efficacy to the significantly more invasive options currently available (e.g., DBS and Duodopa). NDRM shares moved dramatically higher on the news, which we think was partly a product of a slow news day allowing for more investors to look into the story.”

The analyst concluded, “We believe the extra attention on NDRM should be positive for the stock in 2015. Our new $19 PT reflects an incrementally higher chance of success for ND0612H based on last week’s data.”

According to TipRanks.com, which measures analysts’ and bloggers’ success rate based on how their calls perform, analyst Akiva Felt has a total average return of 47.2% and a 80.0% success rate. Felt has a 124.1% average return when recommending NDRM, and is ranked #26 out of 3429 analysts. 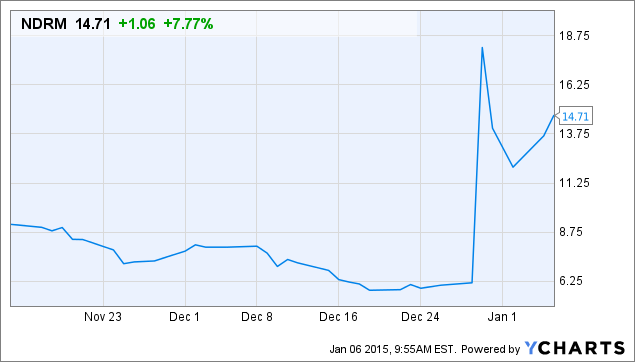