Oppenheimer Raised Yahoo! Price Target On The Back Of Higher BABA Valuation

In a research report sent to investors yesterday, Oppenheimer analyst Jason Helfstein maintained an Outperform rating on Yahoo! (NASDAQ:YHOO) and raised his price target to $61 (from $49), which represents a potential upside of 21% from where the stock is currently trading.

Helfstein noted, “We are now assigning a $324B valuation for BABA, up from $275B previously, based on work by Oppenheimer & Co. analyst Ella Ji. We apply a weighted-average probability regarding the resolution of taxes for YHOO’s remaining 15% BABA stake. Meanwhile, the BrightRoll acquisition should accelerate Video monetization, and we believe management will leverage BrightRoll’s SSP capabilities to scale YHOO’s video inventory. BrightRoll’s DSP technology will be harder to scale, given competition and independence questions, in our view.” 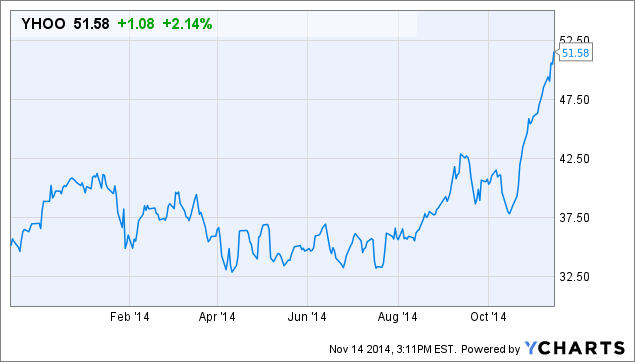