Oppenheimer analyst Chris Kotowski came out with some commentary on Wells Fargo & Co (NYSE:WFC), after the company’s second-quarter results were in line with Kotowski’s expectations, posting EPS of $1.03, compared to the analyst’s $1.04 estimate. The analyst maintained a Perform rating on Wells Fargo stock, without suggesting a price target.

Kotowski noted, “WFC is one of the most profitable (15.8% ROTCE) banking franchises in the industry with some of the most predictable results, but this quarter was a continuation of past themes where sluggish revenues were offset by stronger credit. Pre-provision earnings were $8.8B, which by some coincidence equals the average of the trailing 14 quarters. What we did think was a key takeaway from this quarter is that 1% linkedquarter loan growth (plus an extra day) has finally seemed to translate into revenues with NII up 2.6%.”

The analyst added, “We’ve taken our estimate down for 2016 from $4.45 to $4.42. This is a nickel below consensus as we’ve built in 125 bps of reserve building which consensus has not. In short, a slight miss, but loan growth finally seems to be translating into revenue growth.”

Out of the 21 analysts polled by TipRanks, 8 rate Wells Fargo & Company stock a Buy, 11 rate the stock a Hold and 2 recommend Sell. With a downside potential of 0.9%, the stock’s consensus target price stands at $56.74. 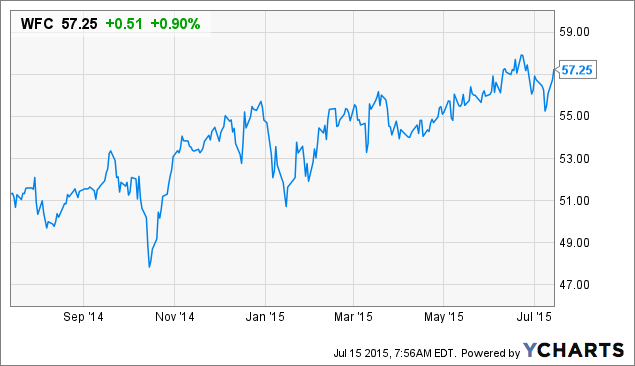