Oppenheimer analyst Akiva Felt came out with his views on Amarin Corporation plc (ADR) (NASDAQ:AMRN), after the company reported its fourth-quarter financial results. The company reported quarterly revenues of $16.5 million and EPS of ($0.11), ahead of Felt’s estimates of $15.6 million and ($0.14), respectively. The analyst maintained a Perform rating, without providing a price target.

Felt noted, “While not rapidly accelerating, Vascepa scripts continue to trend upwards, and we are raising our 2015 estimates accordingly. Reaching a $100M run rate (possible this year) could spur strategic interest, but interested parties would have to balance IP uncertainties and likely need to pay up for the REDUCE-IT optionality, which remains ~3-years from data unless stopped early next year at the interim analysis. AMRN’s strong start to 2015 (up 54% YTD) reflects improving sentiment along with M&A and REDUCE-IT speculation, in our view.”

Bottom line, “We think management is correct in stating that the Street and investors have been neglecting the story. It’s hard to predict whether the recent momentum is sustainable, but continued bullishness likely hinges upon investors stepping up to bet on REDUCE-IT.”

According to TipRanks.com, which measures analysts’ and bloggers’ success rate based on how their calls perform, analyst Akiva Felt has a total average return of 28.0% and a 64.4% success rate. Felt is ranked #50 out of 3504 analysts. 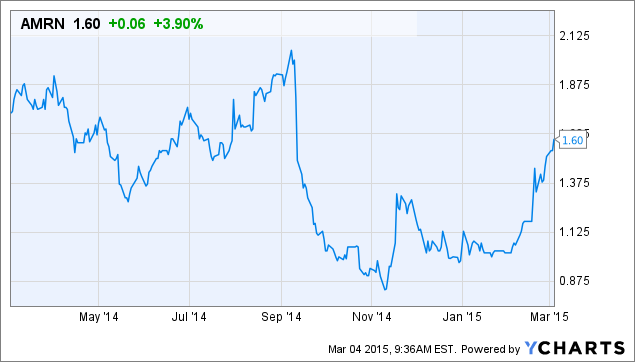