Oppenheimer analyst Bernard Colson downgraded shares of LRR Energy LP (NYSE:LRE) from Outperform to Perform, while no price target was given.

Colson observed, “We downgrade LRE to Perform from Outperform and remove our $20 price target after the company reported in-line 3Q14 results. We believe LRE is in a difficult predicament as it enters a period of weaker oil prices with falling distribution coverage, limited capacity on the credit facility, and a rising cost of capital. It may be even more difficult (but absolutely imperative) for LRE to acquire assets in this environment. While we are not concerned about distribution safety in 2015, the period between now and 2016 is pivotal to distribution sustainability. The negatives here are balanced by a high current yield (12.3%), which keeps us from an Underperform rating. We are updating estimates following 3Q results.”

According to TipRanks.com, which measures analysts’ and bloggers’ success rate based on how their calls perform, analyst Bernard Colson has a total average return of 13.6% and a 57.7% success rate. Colson is ranked #615 out of 3355 analysts. 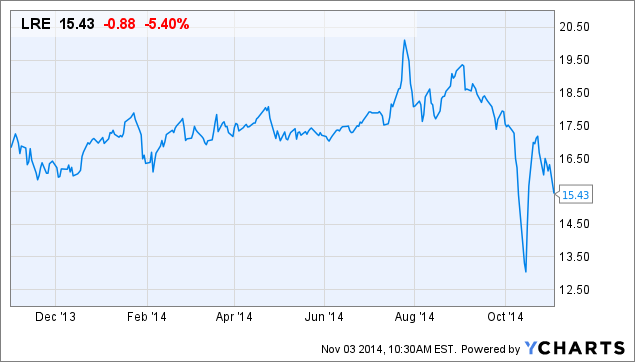 Bear of the Day: EQT Corporation