Dyax Corp. (NASDAQ:DYAX) shares are up 47% today after the company announced positive data from the Phase 1b clinical study of its investigational product, DX-2930, which is being developed for the prevention of hereditary angioedema (HAE) attacks.

Following the news, Oppenheimer analyst Akiva Felt reiterated an Outperform rating on the stock and raised the price target to $26 (from $14).

Felt noted, "Dyax reported essentially best-case DX-2930 Phase 1b data Tuesday afternoon, in our view, showing a 91% reduction in hereditary angeoedema (HAE) attack rates (300/400mg pooled cohort) compared to baseline. We think investor consensus was closer to 60-65% reduction, so even though DYAX shares had been pricing in good results, the data delivered a strong upside surprise."

Furthermore, "Even if efficacy diminishes somewhat in a larger Phase 3 study, DX-2930 has made a giant leap toward becoming the best-in-class prophylactic HAE treatment. We're increasing our market penetration estimates and probability of success (now 75%) accordingly, which moves our price target to $26."

According to TipRanks.com, which measures analysts' and bloggers' success rate based on how their calls perform, analyst Akiva Felt has a total average return of 30.5% and a 68.5% success rate. Felt has a 72.2% average return when recommending DYAX, and is ranked #32 out of 3562 analysts. 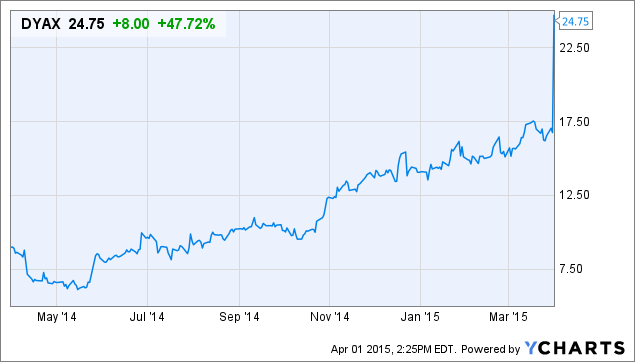 Oppenheimer Reiterates Outperform On Shares Of Dyax, Raises PT To $14