BTIG analyst Mark Palmer weighed in today with a favorable report on shares of On Deck Capital Inc (NYSE:ONDK), reiterating a Buy rating and a price target of $25, which implies an upside of 105% from current levels.

ONDK will report 2Q15 results on Monday, August 3 after the market close, with a conference call scheduled for that day at 5pm ET. Based on the company’s preannouncement, the analyst is increasing his second-quarter adjusted earnings per share estimate to $0.05 (up from a loss of $0.05) versus the consensus estimate of $0.08.

Palmer noted, “On Deck Capital’s stock price has bounced off its all -time low reached on July 1 after almost 80% of the shares came out of post-IPO lockup on June 15. While we anticipated a rebound after ONDK on July 15 preannounced favorable 2Q15 results, the reaction was somewhat muted, and we believe the stock remains exceedingly inexpensive at almost 40% below the level at which it debuted in December.”

Out of the 7 analysts polled by TipRanks, 5 rate On Deck Capital Inc stock a Buy, 1 rates the stock a Hold and 1 recommends Sell. With a return potential of 118%, the stock’s consensus target price stands at $26.60. 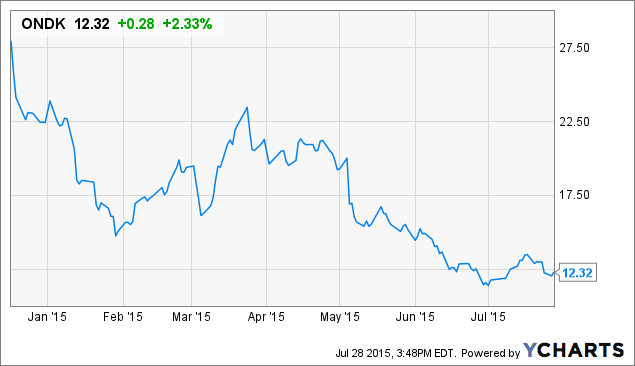