MLV analyst George Zavoico assigned a Buy rating on Omeros (NASDAQ:OMER) with a $19 price target, as the company announced that the Center for Medicare & Medicaid Services (CMS) granted a transitional pass-through status for reimbursement of Omidria™ for the prevention of intraoperative miosis (pupil constriction) and reduction of postoperative pain in cataract surgery or intraocular lens replacement (ILR) procedures.

Zavoico wrote, “The transitional pass-through status will provide Omidria with a temporary Healthcare Common Procedure Coding System (HCPCS) code on January 1, 2015, allowing procedure providers to obtain separate reimbursement of Omidria from Medicare and other third-party payers. Omeros guides to reimbursement of about $400-500 per vial, which is Omeros’ proposed wholesale acquisition cost (WAC) range. While we had already modeled pass-through status in our revenue projections, we see potential upside given that we projected a WAC near the lower end of that range, which is partially offset by a launch delay of about a quarter and higher expenses due to expansion in the Omidria sales force.” 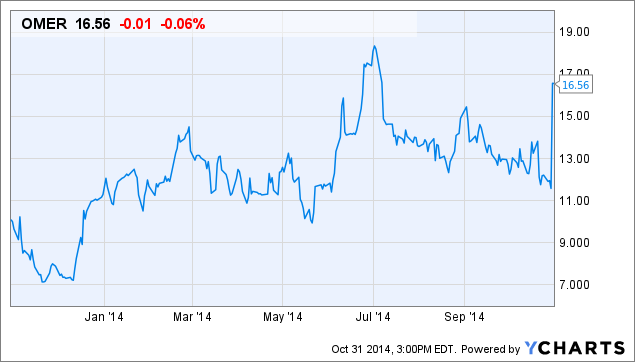