CEO Alan H. Auerbach said, “Despite advances in adjuvant therapy for HER2-positive breast cancer, disease recurrence remains a risk. Since there are no effective therapies for patients whose disease recurs, there is an important need for additional options to further reduce the risk of recurrence […] We appreciate the committee’s comments and the support of the many clinicians, patients and advocates who participated in today’s meeting. We look forward to further discussion with the FDA.”

J.P. Morgan analyst Cory Kasimov commented, “This was one of the less contentious panels we’ve experienced with few surprises on top of Monday’s briefing documents and what seemed to be a generally positive bias in favor of neratinib from the FDA. There was some debate on the appropriate label for the drug, but we believe being restricted to HR+ (which is how we’ve modeled it) is still more than sufficient to drive meaningful sales and strategic value.”

“We’d note that while today’s panel was clearly a critical step in neratinib’s journey, there are additional important events still coming up, including competitive APHINITY data at ASCO, the PDUFA in July, and metastatic Phase 3 data in the coming months. Specifically regarding APHINITY and metastatic, we thought there were some interesting observations that could be gleaned from today’s panel as discussed below. We believe the outlook for these catalysts together with the prevailing high short interest (25%) and low long-only participation will help shape PBYI trading in the coming days and weeks,” the analyst added.

As such, Kasimov reiterates an Overweight rating on Puma Biotechnology shares, with a price target of $89, which implies an upside of 19% from current levels.

According to TipRanks.com, which measures analysts’ and bloggers’ success rate based on how their calls perform, analyst Cory Kasimov has a yearly average return of -5.0% and a 37% success rate. Kasimov is ranked #4379 out of 4560 analysts.

Out of the 7 analysts polled by TipRanks (in the past 12 months), 5 rate Puma Biotechnology stock a Buy, while 2 rate the stock a Hold. With a downside potential of 4%, the stock’s consensus target price stands at $72.17. 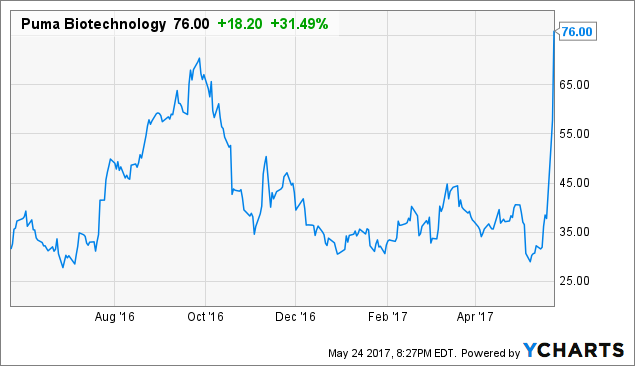