Oppenheimer analyst Ben Chittenden weighed in with a cautious stance on shares of Ocwen Financial Corp (NYSE:OCN), as the company’s stock is off more than 30% since delivering disappointing second-quarter earnings results on July 31. The analyst reiterated a Perform rating on OCN, without providing a price target.

Chittenden wrote, “We think the best analogy for OCN is that it’s in the middle of a hurricane. It started in 2014, the front eyewall hit in late 2014/beginning of 2015 and the last five months was the calm within the eye of the storm. Now we just felt the beginning of the back eyewall. There are certainly still risks (the back eyewall is no walk in the park). However, to the extent they get past the back eyewall we think they will be battle proven, well capitalized and regulators will have gone through their operations with a fine tooth comb. The next six months are the test, and thus we aren’t ready to jump back into the shares quite yet.”

Bottom line, “We are lowering our estimates to reflect slower expense reductions and slightly higher interest costs; 2015 and 2016 are becoming transition years toward a potentially cleaner earnings story in 2017. For now we remain on the sidelines.”

Out of the 6 analysts polled by TipRanks, 2 rate Ocwen Financial Corp stock a Buy, 3 rate the stock a Hold and 1 recommends to Sell. With a return potential of 104.8%, the stock’s consensus target price stands at $15.88. 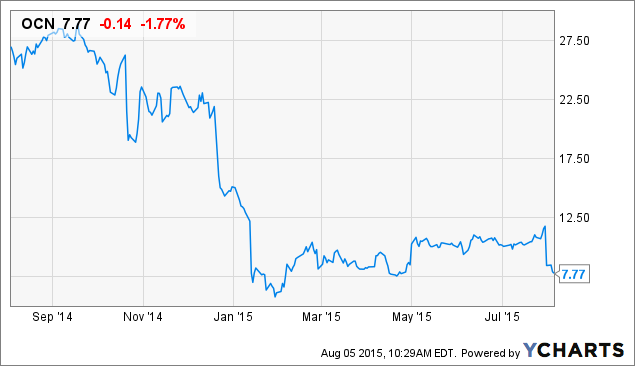 Why Oppenheimer Is Still Cautious On Ocwen Financial Corp