In a research report released August 11, Roth Capital analyst Philip Shen reiterated coverage with a Buy rating on Nuverra (NES) with a $20 price target, following the company’s second quarter results, which were below analysts’ estimates.

Shen noted, “NES posted a Q2 miss on light revenues. Although NES turned some business away due to a focus on high-margin revenues, the Bakken appears to be oversupplied, resulting in lower pricing. With lowered expectations, the stock may remain at these levels until TFI is sold, and the oversupply condition is resolved. We maintain our Buy as we believe the industry is transitioning to full-service players, with NES a direct beneficiary.” The analyst added, “Although management is focused on high margin revenues, there appears to be an oversupply situation in the Bakken, resulting in more competitive pricing. As a result, estimates have come down as has the stock. The stock may be range bound until there is visibility to greater growth and until the closure of the TFI sale.”

According to TipRanks.com, which measures analysts’ and bloggers’ success rate based on how their calls perform, analyst Philip Shen has a total average return of -2.5% and a 37.8% success rate. Shen has a -25.0% average return when recommending NES, and is ranked #2854 out of 3219 analysts. 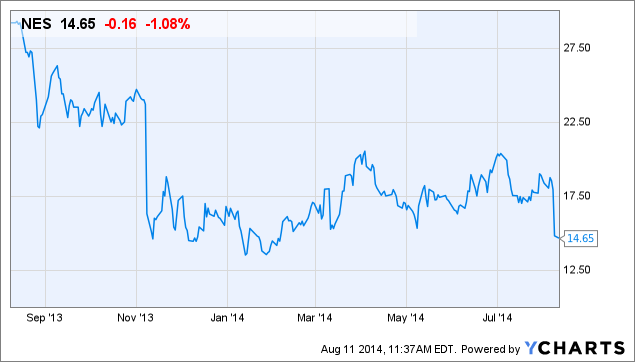