In a research report released yesterday, Janney Capital analyst Kimberly Lee reiterated a Buy rating on NPS Pharmaceuticals (NPSP) with a $37 fair value, on the back of the company’s earnings results. NPSP posted Gattex/Revestive sales of $21.9 million, in line with Lee’s estimate but slightly below consensus of $22.7 million estimate. The company turned profitable with a reported EPS of $0.02 versus consensus of $0.00. The company maintained its prior revenue guidance of $100-$110 million, which implies a slight acceleration in sales in 2H.

Lee wrote, “Next catalysts include an Adcom meeting for Natpara on September 12 th followed by a PDUFA date of October 24th and an MAA filing by year-end. We continue to expect a favorable Adcom meeting and a potential Natpara approval by the PDUFA date. We believe NPSP shares remain undervalued given the significant targeted market opportunities, meaningful top-line growth and upcoming value-creating catalysts.

The analyst continued, “Gattex/Revestive sales grew 23% QOQ to $21.9 million. New patient starts accounted for approximately 50% of prescriptions, which we view as an encouraging commercial metric. Management did not provide additional launch metrics except to say that discontinuation and drop-out rates were similar to 1Q. It remains too early to tease out EU dynamics given the uncertain timing of launches country-by-country. We have adjusted our 2014 Gattex/Revestive sales estimate to $102.1 million from $101.3 million to account for reported 2Q revenue”.

According to TipRanks.com, which measures analysts’ and bloggers’ success rate based on how their calls perform, analyst Kimberly Lee has a total average return of 3.8% and a 50% success rate. Lee has a 3.1% average return when recommending NPSP, and is ranked #1338 out of 3213 analysts. 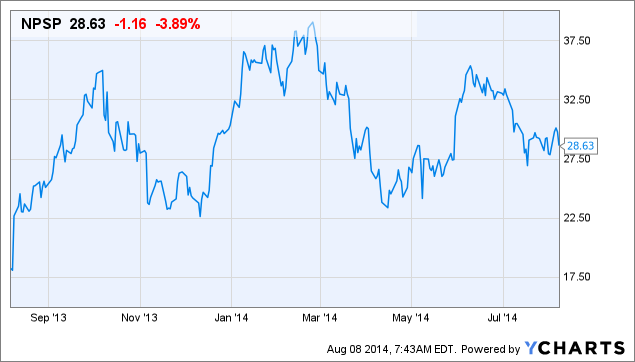