Freednan comments: “We are raising our forward topline, GM and EPS estimates as preliminary guidance is slightly better than we previously modeled, offset somewhat by higher SG&A driven by digital investments, DTC expenses and continued increases World Cup demand creation into 1Q; We also raise our prior belowconsensus FY15 estimates”. However, “Despite our higher estimates, we await a better entry point. Our LT bias remains long and we continue to look for a better opportunity to get more constructive with our rating. EPS growth of just +2% (despite topline of ~+11%,) China choppiness and full valuation holds us back from being more constructiveon the shares as NKE will likely continue to reinvest any upside; however we believe there may be potential positive near-term upside to sentiment spurred by the Nikesponsored US Men’s advancement in the World Cup”.

According to TipRanks, which measures analysts and bloggers success rate based on how their calls perform, analyst Corinna Freedman currently has a one-year average return of 16.8% and a 74% success rate. She is ranked #510 out of 3135 analysts. 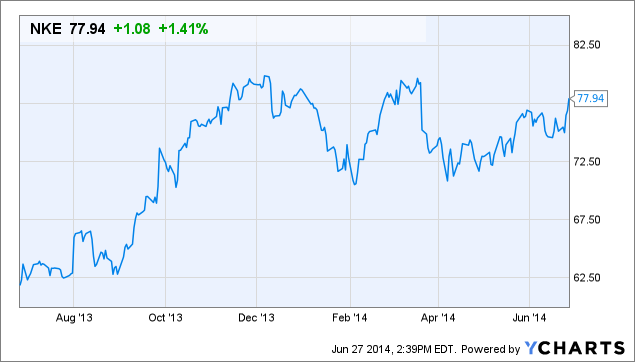