In a research report released Thursday, Needham analyst Alan Carr reiterated a Buy rating on shares of ACADIA Pharmaceuticals Inc. (NASDAQ:ACAD) with a price target of $49, after the company announced that an NDA has been submitted to FDA for Nuplazid in Parkinson’s Disease Psychosis.

Carr noted, “Nuplazid has an improved safety/tolerability profile relative to other antipsychotics. We expect regulatory approval and substantial commercial interest. We believe the drug may be well-suited for a range of psychosis indications beyond PDP. We reiterate BUY and $49 price target in anticipation of a Priority Review and near-term regulatory approval.”

“The NDA was submitted based on a 6-week pivotal Phase 3 trial that enrolled 199 patients, 94 randomized to placebo and 105 to Nuplazid. The trial met the primary endpoint of reduced psychosis (-5.79 Nuplazid vs -2.73 placebo SAPS-PD scores; p=0.001), with no worsening of motor function. Additionally, all secondary endpoints and exploratory endpoints of nighttime sleep, daytime wakefulness, and caregiver burden were significantly improved. The drug was generally safe and well-tolerated,” the analyst added.

All the 7 analysts polled by TipRanks rate ACADIA stock a Buy. With a return potential of 37%, the stock’s consensus target price stands at $55.57. 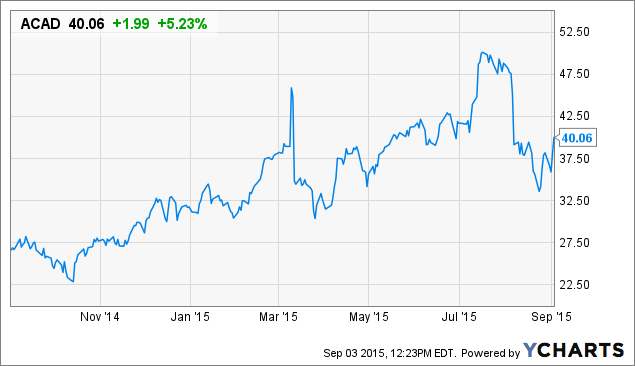