In a research report issued today, Needham analyst Alan Carr reiterated a Buy rating on Acadia Pharmaceuticals Inc. (NASDAQ:ACAD) and reduced the price target to $38 (from $40), following the news that Nuplazid NDA submission timing has moved from Mar 2015 to the second half of 2015 and CEO Uli Hacksell is retiring.

Carr observed, “Mgmt admitted that preparations for FDA review were inadequate. Changes have been made to address the matter, including hiring additional staff and external consultants as well as shifts in senior management responsibilities. The delay is not tied to any new communication from the FDA or any new safety data. We reiterate our Buy but reduce price target to $38 (was $40) due to delay in Nuplazid launch. Our enthusiasm for the drug and its commercial potential as an antipsychotic is unchanged.” 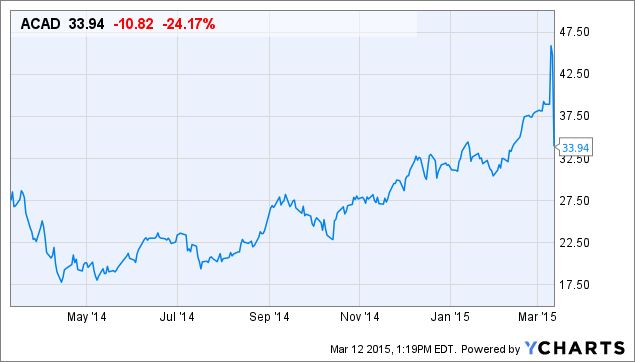