Needham’s healthcare analyst Alan Carr weighed in today with an update on Arena Pharmaceuticals, Inc. (NASDAQ:ARNA), after the company reported first-quarter financial results and held a conference call last night to provide a corporate update. The analyst maintained a Hold rating, without providing a price target. Arena shares are currently trading at $4.25, up $0.10 or 2.53%.

Carr noted, “Arena reported $6.6M in 1Q15 Belviq sales revenue from collaborators Eisai and Ildong, compared to our $5.1M estimate. Sales through Ildong were stronger than we expected. Eisai recorded $12.8M in 1Q15 U.S. sales, compared to our $14.0M estimate. Ildong recorded $4.8M in sales in S. Korea, driven largely by initial stocking. As a reminder, Belviq was launched in that territory in Feb 2015.”

“Arena also announced last night that Roivant Sciences in-licensed WW rights to nelotanserin (APD-125). The compound had previously been investigated by Arena as a treatment for insomnia. Roivant will explore utility in neuropsychiatric disorders, including psychosis. We maintain HOLD, awaiting further pipeline development.”, the analyst added. 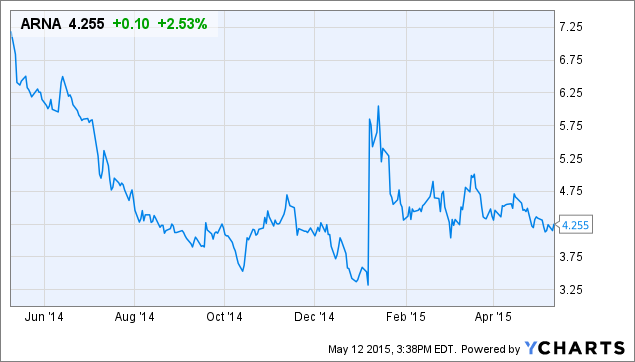 These 3 Cannabis Stocks Are Set to Skyrocket, Say Analysts