Since Cypress Semiconductor Corporation (NASDAQ:CY) completed the acquisition of Spansion Inc., Needham analyst Rajvindra Gill reiterated a Buy rating on CY on March 31 with a price target of $20 since he is optimistic about the merger.

Gill predicts the combined entity of Cypress and Spansion will generate “significant earnings leverage.” He notes that Cypress will “accelerate Spansion’s previous strategy of walking away from lower-density, lower-margin business in favor of higher-margin sales.” The analyst warns that the upcoming quarter report may be “messy” since the merger was only competed a couple of weeks ago.

Gill favors CY over other semiconductor stocks for its stability. The analyst attributes the stability to the steady strength of auto/industrial, limited PC exposure, and “limited FX impact with the majority sales in USD and more design win/embedded focus rather than commodity.” Looking forward, the analyst noted that manufacturing savings should be more substantial in 2016 and predicts gross margins to increase from 43.7% in 2015 to 46.3% in 2016. In the long term, Gill sees a “path to 50% gross margin for the combined company” driven by several factors, including manufacturing synergies as utilization increases.

According to TipRanks.com, which measures analysts' and bloggers' success rate based on how their calls perform, analyst Rajvindra Gill has a total average return of 20.5% and a 60.4% success rate. Gill has a 9.9% average return when recommending CY, and is ranked #64 out of 3560 analysts. 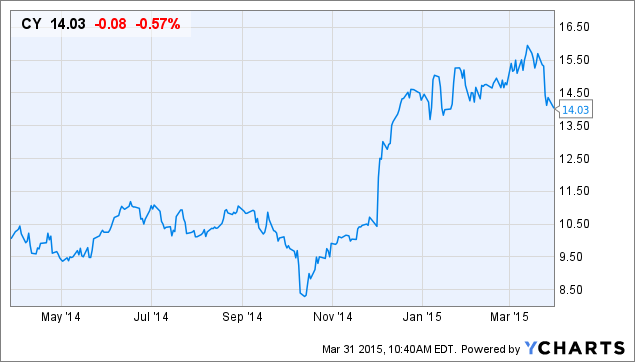