In a research report published this morning, Needham analyst Alan Carr maintained a Buy rating on Acadia (NASDAQ:ACAD) and raised his price target to $40 (from $26), which implies an upside of 22% from current levels.

Carr observed, “We expect Acadia to submit a Nuplazid NDA in Parkinson’s Disease Psychosis (PDP) in 1Q15. Given the drug was designated a Breakthrough Therapy in Sept 2014, we believe a Priority Review is likely and we expect Nuplazid to be approved in the U.S. in 4Q15. As a reminder, positive results from a Phase 3 trial in PDP were announced in 2012. Per discussions with the FDA and EMA, mgmt believes only one successful Phase 3 trial is needed for approval. Nuplazid may have utility across several psychosis indications, given prior success as adjunctive therapy in schizophrenia. Results from a Phase 2 trial in Alzheimer’s Disease Psychosis are expected in 4Q15 and Acadia plans to initiate a Phase 2 trial in schizophrenia as maintenance monotherapy in 2H15.” 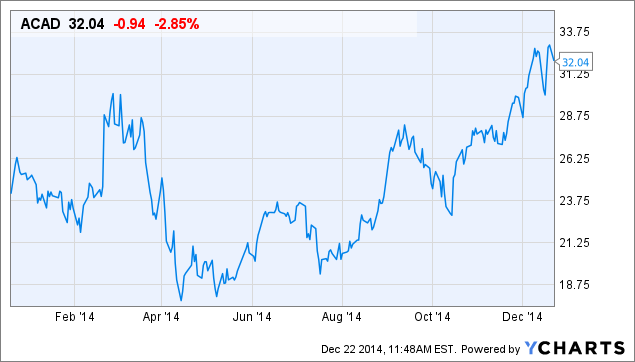