Nanosphere: Despite The Depressed Outlook There Are Still Aspects To Remain Bullish, Says Roth Capital

In a research note published yesterday, Roth Capital analyst Chris Lewis maintained a Buy rating on Nanosphere (NSPH) and cut his price target from $3 to $1.50, following the company’s quarterly earnings, which failed to meet expectations.

Lewis wrote, “NSPH materially missed 2Q expectations and lowered its 2014 revenue guidance by 30%. While we are disappointed with the miss and magnitude of the guidance revision, we believe the gradual materialization of live conversions, an expanded menu, and improved sales efforts should lead to improving results over the next 12-18 months”.

Furthermore, the analyst wrote, “Despite the depressed outlook, we believe there are aspects to remain bullish on over next 12-18 months. First, the delayed customer live conversions and associated instrument revenues should materialize at some point, which should stabilize and eventually improve instrument sales. Second, NSPH’s menu continues to expand and we expect FDA clearance for the full enteric panel in the coming months, which will provide NSPH with a differentiated menu that includes GP, GN, and enteric heading into 2015. We expect a majority of GP customers to eventually adopt GN and enteric, which should drive increased consumable revenue per system over time. Finally, we expect NSPH’s sales expansion and retooled strategy to begin contributing in 2015. So while the next few quarters will continue to be a work in progress, we believe NSPH is positioned to deliver improving results over the longer-term”. 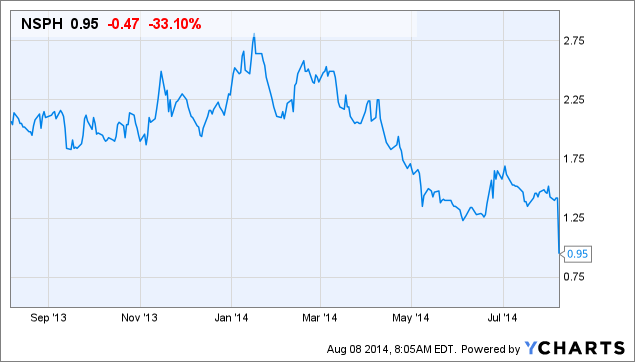