Murphy observed, “There is no doubt that Myriad has lost some market share with the introduction of competitive BRCA tests and hereditary cancer panels and one could argue it has lost more potential share given a view that growth of the broader BRCA market has escalated in the wake of recent celebrity publicity. Still, despite the continued elevated short interest, the bear thesis around massive price pressure/market share loss does not appear to have played out (at least as of yet).”

The analyst continued, “There is building evidence to suggest there are additional genes that are relevant in hereditary breast and ovarian cancer, and it appears that a hereditary cancer panel is becoming increasingly accepted as the right approach by physicians and payers. Moreover, we also believe the ability to determine the clinical significance of BRCA1/2 variants requires significant analytical/bioinformatics expertise as well as access to large sample sizes (given the low frequency of non-Ashkenazi Jewish variants). Thus, our view is that the number of providers that provide comprehensive hereditary cancer panels is likely to be limited to a few, centralized, specialty labs. We also believe that Myriad maintains an advantage given the size of its commercial infrastructure (including large salesforce, billing infrastructure, and lab operations, which enable it to provide industry-leading turnaround times), which explains why Myriad appears to be gaining decent traction in the market with its MyRisk conversion thus far.” 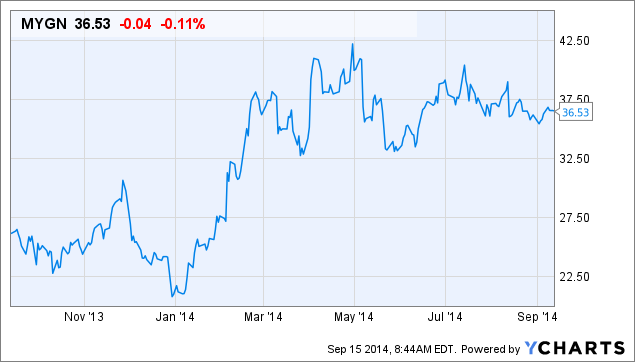