Molina: We View The Company As Undervalued, With Peer-High Growth Potential, Says Wedbush

In a research note published today, Wedbush analyst Sarah James reiterated an Outperform rating on Molina Healthcare (NYSE:MOH) with a $53 price target, in light of the news that Puerto Rico has awarded a $3 billion contract to five insurers including Molina.

James wrote, “The contract is set to begin 4/1/15. Molina won the east and southwest regions, Triple-S, which currently serves the entire contract on an ASO basis, won the risk-based re-bid for the metro north and west regions, First Medical Health plan won San Juan, metro north, and virtual regions (4.7K beneficiaries in custody of the Family Department), PMC the southeast, and MMM the northeast. Humana bid, but did not win the contract.” The analyst added, “We estimate the revenue could reach $600- 750M annually on the contract. Based on recent data from Puerto Rico, we estimate the east region holds 220K eligibles and the Southwest region 146K eligible, including 18K duals. The initial contract award in May indicated Molina won 50% of 4 regions, this award was pulled and re-bid. We had estimated the initial award to be worth 362K eligibles, $500-750M in revenue, and $0.08-0.14 EPS. We currently do not have the award in our estimates.”

The analyst continued, “We believe well-run insurers stand to do better under a profit cap than an MLR minimum. The difference between a large well-run Medicaid plan and a small local provider can be several hundred basis points of SG&A. For a well-run plan, this better efficiency gives an opportunity for high profit levels, while giving the state overall dollar savings.” 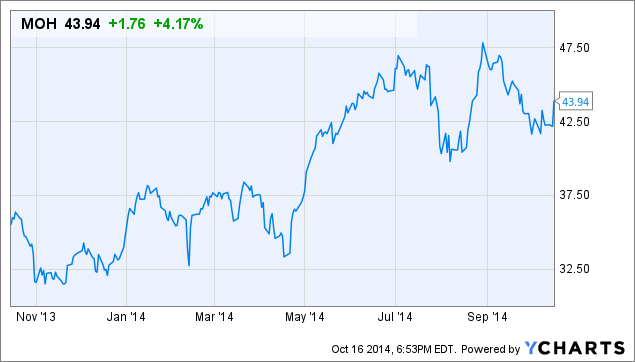