Boyden noted, “estimate but slightly below the consensus estimate. During the quarter, the company took delivery of a 2006-built 8,204 TEU container vessel and expects to take delivery of another 8,204 TEU container vessel by October 31, 2014. Furthermore, the company extended a number of its time charters, leaving less than 1% open days in 2014, while still maintaining nearly 40% open days in 2015; we suggest the comnpany has implemented this strategy in order to capture expected market upside potential in 2015. Given that we have not changed our overall rate assumptions for 2015, our operating EPS estimates remain unchanged at $0.35 per unit in 2014 and $0.92 per unit in 2015. NMM currently trades at 8.3x EV/EBITDA 2015E versus the peer average of 6.4x. However, given the high distribution yield as well as the security of both exisitng and future cash flows, we believe the company deserves to trade at a premium valuation; as such, we maintain our $16 price target.”

According to TipRanks.com, which measures analysts’ and bloggers’ success rate based on how their calls perform, analyst Natasha Boyden has a total average return of 10.0% and a 53.8% success rate. Boyden is ranked #1077 out of 3349 analysts. 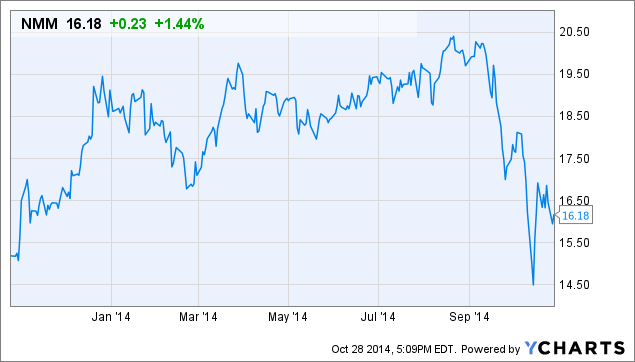