In a research report released today, MLV analyst George Zavoico reiterated a Buy rating on Peregrine Pharmaceuticals (NASDAQ:PPHM) with a $3.50 price target, on the heels of the company’s announcement that preclinical data demonstrating bavituximab’s high and specific affinity for Ebola virions and Ebola virus (EBOV)-infected cells were published in the peer-reviewed Journal of Immunology Research (JIR).

Zavoico wrote, “While we believe Peregrine will continue its current focus on bavituximab’s Phase III SUNRISE pivotal trial for its lead indication in non-small cell lung cancer (NSCLC), these preclinical results could convince academic institutions or government agencies to assist Peregrine in funding the development of bavituximab as an antiviral agent in the hope of identifying an effective agent to treat Ebola-infected persons and preventing a potential Ebola outbreak.”

The analyst continued, “The newly published paper is titled ‘Effective Binding of a Phosphatidylserine-Targeting Antibody to Ebola Virus Infected Cells and Purified Virions’ and it is featured in a special Vaccines and Therapies for Biodefense Agents edition of the JIR. Based on in vitro experiments, Peregrine proposes that exposed phosphatidylserine (PS) could enable bavituximab to bind with high specificity to purified Ebola virions and EBOV-infected cells. It has been shown that viral infection could lead to the expression of cell surface PS antigens, and previous research with another lethal viral hemorrhagic fever animal model (Pichinde virus model in guinea pigs) demonstrated that PS-targeting antibodies such as bavituximab could bind to exposed PS to trigger mechanisms to remove blood-borne virions as well as infected cell.” The analyst added, “While it is premature to speculate that bavituximab could emerge as an Ebola treatment based on these preliminary in vitro experiments, we believe these findings could be helpful in eliciting interest from academic researchers and public institutions to consider further preclinical studies with bavituximab in this indication.” 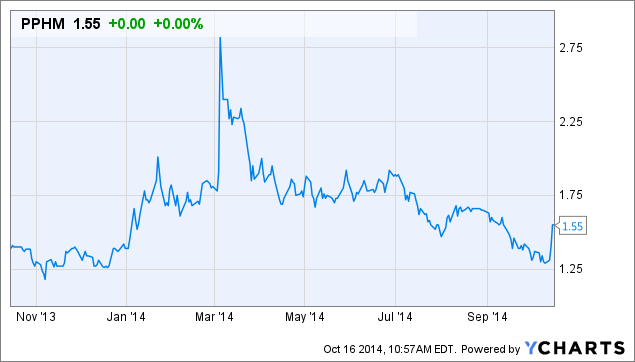