MLV analyst Arlinda Lee weighed in with a few insights on Synta Pharmaceuticals Corp. (NASDAQ:SNTA), after the company released its second-quarter results and provided update on its pipeline. Additionally, the analyst reiterated a Buy rating on Synta shares, with a $6.50 price target, which represents a potential upside of 225% from where the stock is currently trading.

Lee observed, “Synta reported first interim analysis of the Phase 3 GALAXY-2 trial of docetaxel +/- ganetespib in 2nd-line non-small cell lung cancer (NSCLC) by year-end 2015. This is a crucial catalyst for Synta as our investment thesis assumes a positive mOS (median overall survival) readout. Given the efficacy shown in the Phase 2 GALAXY-1 final dataset, we remain optimistic for a positive GALAXY-2 readout paving the way to ganetespib’s US approval in 2017.”

Furthermore, “Synta reiterates its previous projected cash burn to be sufficient through 1H16. With GALAXY-2’s first interim readout by year-end 2015 and a projected IND filing in 2016 (assuming data are positive), we expect Synta to conserve cash use by focusing on ganetespib and Hsp90-inhibitor Drug Conjugates (HDCs) development.”

According to TipRanks.com, which measures analysts’ and bloggers’ success rate based on how their calls perform, analyst Arlinda Lee has a total average return of 2.1% and a 40.9% success rate. Lee has a -5.6% average return when recommending SNTA, and is ranked #1735 out of 3728 analysts.

All the 3 analysts polled by TipRanks rate Synta Pharmaceuticals stock a Buy. With a return potential of 387.5%, the stock’s consensus target price stands at $9.75. 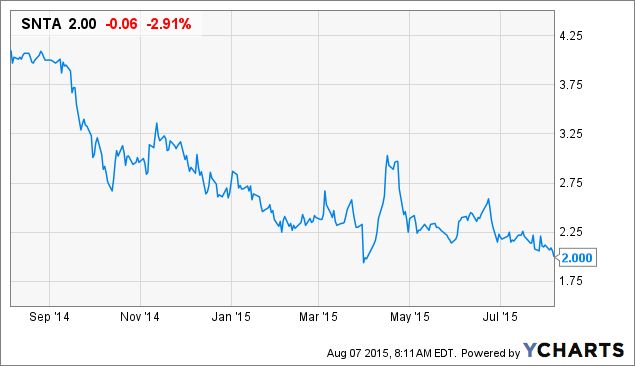