Driscoll wrote, “Revenues and EPS missed our expectations due primarily to two factors. First, orders from former #1 customer Agility Fuel Systems – with which QTWW now competes directly – are rolling off, with revenue contribution down 70% q/q to < $1M; we expected orders would end by YE14 but at a more measured pace. Second, QTWW is rapidly building out its supply chain to support fuel system sales, which caused some higher period costs including expedited freight, higher material costs and factory start-up costs. We expect these costs to normalize over the next 2-3 quarters. On a positive note, QTWW shipped ~120 fuel systems and has a healthy backlog of ~600 systems. QTWW also announced a new development program for an auto hydrogen alliance and has begun to ship product to support GM’s (GM-NR) Chevrolet Impala bi-fuel (CNG & gasoline) vehicle that just entered production, which is targeted at fleets. So while 3Q results were disappointing, we always expected the transition from CNG storage tank provider to full systems would take several quarters to achieve.” 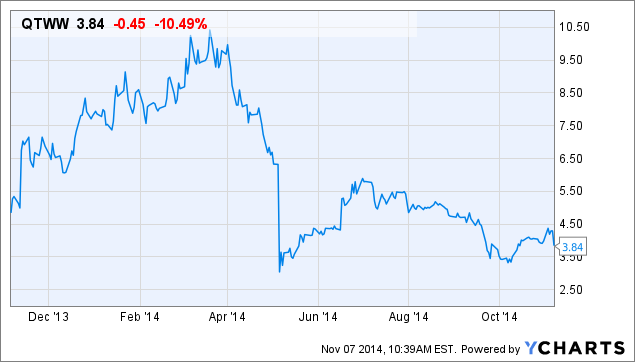