In a research report released Tuesday, MLV analyst Thomas Yip reiterated a Buy rating on shares of OXiGENE Inc (NASDAQ:OXGN) with a price target of $6.50, after the biopharmaceutical company released its second-quarter results and hosted a conference call yesterday to report updates of its lead candidates.

Yip wrote, “OXiGENE reiterates its plan to submit an SPA application for a pivotal Phase III trial of fosbretabulin for the treatment of recurrent ovarian cancer by yearend 2015. We do not foresee major hurdles in obtaining the SPA, as the FDA had already signaled in June that progression-free survival (PFS) could serve as the pivotal trial’s primary endpoint. We remain confident in fosbretabulin’s ability to improve mPFS when combined with bevacizumab, as the combination has already demonstrated an impressive mPFS improvement in the Phase II GOG186I trial.”

Furthermore, “OXiGENE ended 2Q:15 with $33.1 million in cash and cash equivalents, or about 2 years of cash left based on our estimated annual burn rate of $12.3 million. We will adjust our projected burn rate as we learn more about the design of the pivotal ovarian cancer trial.”

According to TipRanks.com, which measures analysts’ and bloggers’ success rate based on how their calls perform, analyst Thomas Yip has a total average return of 1.9% and a 45.0% success rate. Yip has a -9.4% average return when recommending OXGN, and is ranked #2061 out of 3727 analysts.

All the 2 analysts polled by TipRanks rate Oxigene stock a Buy. With a return potential of 370%, the stock’s consensus target price stands at $6.25. 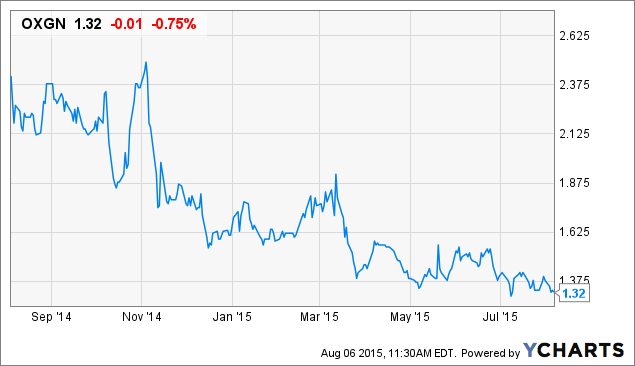