MLV analyst Thomas Yip came out with his views on OXiGENE Inc (NASDAQ:OXGN), after the company reported its first-quarter results and hosted a call to discuss the latest progress of fosbretabulin and OXi4503. The analyst reiterated a Buy rating on the stock, with a $6.50 price target, which represents a potential upside of 368% from where the stock is currently trading.

Yip noted, “OXiGENE reaffirmed its target to finalize the designs of a pivotal Phase III trial of fosbretabulin for the treatment of recurrent ovarian cancer with the FDA’s input by the end of 2Q:15. OXiGENE plans to apply for a Special Protocol Assessment (SPA) shortly thereafter and to initiate the pivotal trial in 2016. We believe an SPA could increase fosbretabulin’s chance to succeed in ovarian cancer, as it would enable OXiGENE to affirm median progression-free survival (mPFS) as an approvable endpoint. Recall that fosbretabulin has already demonstrated an impressive mPFS improvement in the Phase II GOG186I trial in the target patient population.”

According to TipRanks.com, which measures analysts’ and bloggers’ success rate based on how their calls perform, analyst Thomas Yip has a total average return of -2.1% and a 28.6% success rate. Yip has a -13.1% average return when recommending OXGN, and is ranked #2833 out of 3587 analysts. 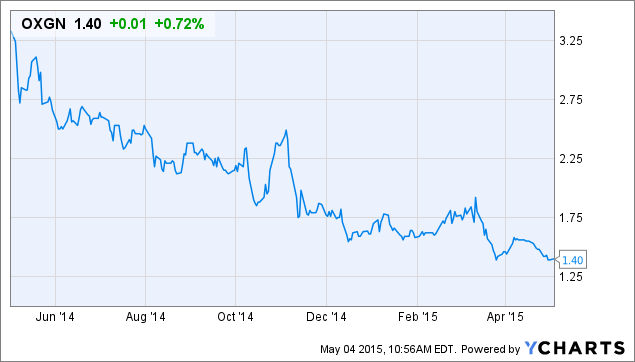