MLV analyst George Zavoico is out today with his second report this week on Oxigene (NASDAQ:OXGN), maintaining a Buy rating with a $6.50 price target, as Genentech announced FDA approval of bevacizumab (Avastin®) in combination with chemotherapy for treating platinum-resistant, recurrent ovarian cancer.

Zavoico explained, “This has important implications in discussions between OXiGENE and the FDA regarding the design of a protocol for a pivotal Phase III trial of a combination of its vascular disrupting agent (VDA), fosbretabulin, and bevacizumab for the same indication. Today’s approval of bevacizumab is based solely on a significant prolongation in median progressionfree survival (mPFS) and not on a prolongation in median overall survival (mOS) in a Phase III trial called AURELIA. In our view, mPFS will now likely be the primary endpoint of OXiGENE’s pivotal trial with fosbretabulin, potentially accelerating the path to approval since a mPFS endpoint occurs several months earlier than a mOS endpoint in recurrent ovarian cancer. The remaining question is what drug regimen to use in a comparator arm. OXiGENE guided to final decision on the protocol design, in consultation with the FDA, in mid-2015.” 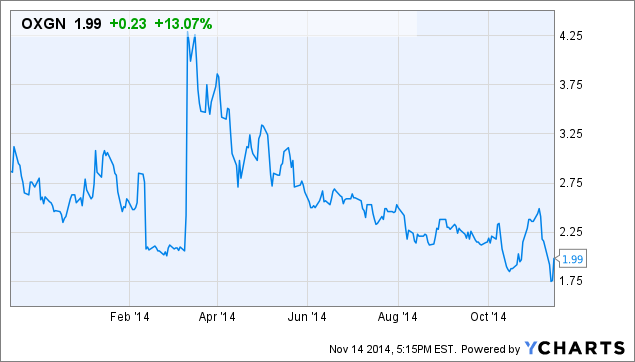