In a research report sent to investors today, MLV analyst George Zavoico reiterated a Buy rating on Cytokinetics, Inc. (NASDAQ:CYTK) with a $9.00 price target, as the company reported its fourth quarter results and outlined its ambitious clinical development strategy for its pipeline in its conference call yesterday.

Zavoico noted, “Cytokinetics will begin a Phase III pivotal trial of tirasemtiv for amyotrophic lateral sclerosis (ALS) in 2Q:15, a Phase II trial of CK-107 for spinal muscular atrophy (SMA) in 2H:15, and could announce the registrational path of omecamtiv for chronic heart failure (CHF) after a data readout from the Phase II COSMIC-HF trial in 2H:15. Importantly, we think Cytokinetics will be able to conduct these key clinical trials with reimbursements from its partners Amgen, Inc. (NASDAQ:AMGN) and Astellas Pharma for omecamtiv in heart failure and CK-107 for SMA, respectively, and $83.2 million in cash and cash equivalents at year-end 2014 (with an additional $45 million received in January 2015).” 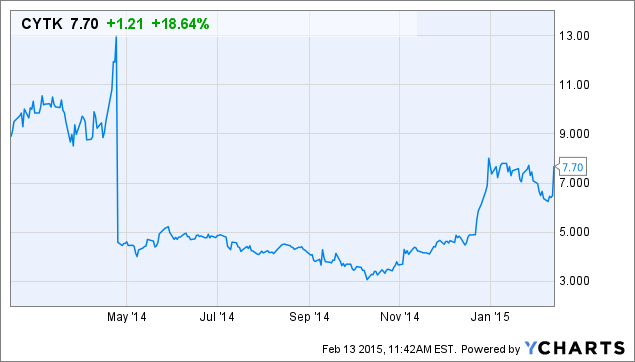