In a research note published yesterday, MLV analyst George Zavoico reiterated a Buy rating on Cerus (NASDAQ:CERS) with a $6 price target, on the heels of the news that the company has submitted a clinical protocol under the Compassionate Use Investigational Device Exemption to the FDA for the use of INTERCEPT Plasma to treat persons infected by the Ebola virus.

Zavoico wrote, “There is evidence that passive immunotherapy by infusion of convalescent plasma containing anti-EBOV antibodies collected from survivors of EBOV infection could be beneficial to persons with an acute EBOV infection. INTERCEPT Plasma could be an important tool to inactivate undetected bloodborne pathogens, such as malaria, hepatitis, or HIV, that may be present in plasma collected from EBOV survivors. In addition to the already recently approved IDE for INTERCEPT Platelets in regions where Chikungunya (CHIKV) and Dengue (DENV) virus is prevalent, this represents another opportunity for Cerus to demonstrate real-life benefits of the INTERCEPT system for an urgent need that now has the public’s attention.”

The analyst continued, “FDA approval of today’s IDE filing would allow access to the currently unapproved INTERCEPT Plasma product for EBOV patients in the U.S. While the standard review time for an IDE by the FDA is about 30 days, if more persons become infected with EBOV in the U.S., we envision an expedited review of less than a month (fortunately, 43 persons exposed to the first patient in Dallas were declared free of EBOV disease today). Passive immunotherapy with convalescent plasma has successfully been used in treating patients with hemorrhagic viral infections and has been shown to reduce the mortality rate of patients with serious influenza.” 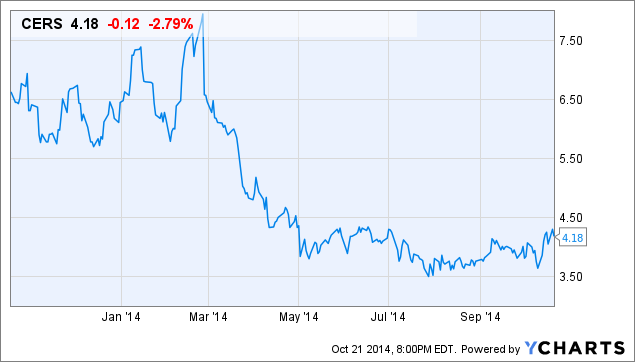