In a research note released today, MLV analyst George Zavoico reiterated a Buy rating on Cerus Corp. (NASDAQ:CERS) with a $6 price target, on the heels of Cerus’s announcement that the American Red Cross (ARC) will be the first to participate in installing and implementing the INTERCEPT Platelets system in Puerto Rico (PR) under the Investigational Device Exemption (IDE) which were approved by the FDA on October 10.

Zavoico wrote, “Remarkably, the ARC made its decision just 16 days after IDE approval. While the very real Ebola virus (EBOV) threat has captured headlines, there is an ongoing epidemic of both Chikungunya (CHIKV) and dengue (DENV) viruses on certain islands in the Caribbean, as well as outbreaks in some southern U.S. states (particularly Florida). The rapid IDE approval by the FDA and decision to implement INTERCEPT technology by the ARC underscore the threat the potential epidemic and outbreaks pose to the blood supply and the confidence both organizations have in the technology. Moreover, in a good sign, the FDA’s Blood Products Advisory Council (BPAC) has not placed blood pathogen inactivation or review of Cerus’ PMA for INTERCEPT Plasma or Platelets on its agenda for a December meeting.”

The analyst continued, “We note that the IDE protocol allows the replacement of bacterial detection and gamma irradiation of platelets prepared for donation with the INTERCEPT system. The ARC noted that it expects certain operational benefits with the implementation of the INTERCEPT system, which we interpret as improved efficiencies, lower costs, and more timely release of products. If these potential benefits are confirmed in PR, we think the ARC could become Cerus’ first customer in the U.S. mainland to install and implement the INTERCEPT Plasma and Platelets system following their expected FDA approvals next year. We expect its successful use in PR will validate the platform, which could translate into more rapid adoption in the U.S. We expect platelet collection to begin in PR before year-end.” 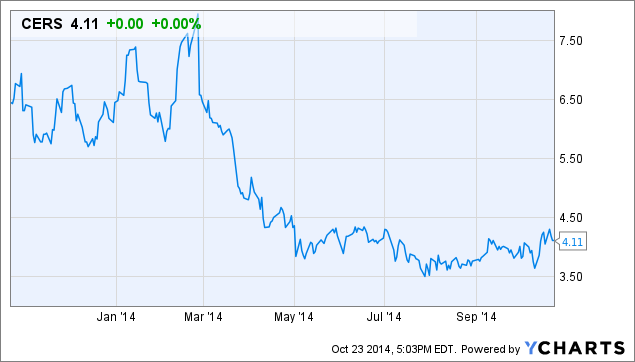