Mabry wrote, “CRZO is expanding its position in the core of the Eagle Ford Shale by acquiring the 25% working interest that it didn’t already own in 6,820 net acres in La Salle, Atascosa, and McMullen counties, TX. The deal takes its total net acreage in the play to >81,000 and its avg. w.i. in the properties to ~100%. Associated net production of ~2.7 MBoe/d (85% oil) during Q3’14 and est. proved reserves of 16.7 MMBoe (82% oil, 34% developed) represent 8% and 16% of company totals, respectively. Total consideration of ~$243 million cash (~$93 million paid at closing on October 24 with the balance due by February 2015) implies attractive purchase price metrics of ~$90,000/Boepd or ~$14.50/Boe… and that’s prior to considering any upside. We have been valuing CRZO’s Eagle Ford position at ~$50,000/acre in aggregate, so the headline acquisition price of ~$36,000/acre appears accretive to our NAV. For now, we’re leaving our target price unchanged at $84, but plan to reassess our assumptions when the company reports earnings in early November.”

The analyst continued, “By our analysis, the company’s Eagle Ford position offers some of the best rates of return and has one of the lowest breakeven oil prices in the sector. CRZO has been expressing its confidence in the consistency and repeatability of the play by picking up as much acreage as it can find within its core areas. This transaction makes complete sense as CRZO already owns and operates the assets, so its incremental F&D and production costs are minimized. The company was already ahead of its acquisition target of 10,000 net acres per year in the Eagle Ford —which would have put it on pace to achieve >80,000 net by YE’15—but this objective has now been met. Its drilling inventory is up to >915 net locations (from 814), or 15-20 years on its current 3-rig program.” 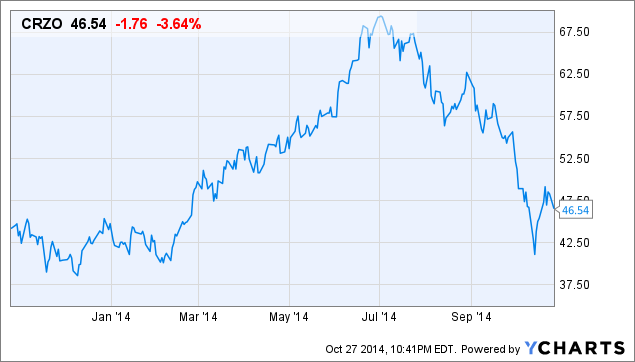