Petersen wrote, “BDN reported 3Q14 core FFO/share of $0.36, in line with our estimate and consensus. Management introduced 2015 FFO/sh guidance of $1.38-$1.48, which is in line with our estimate at the midpoint, but a penny below consensus. Same store NOI moderated to +4.2%, compared to +6.7% last quarter. That said, we view a +4.2% result as very positive considering the stagnant rent and occupancy levels in the Philadelphia office market. Occupancy ticked down 40 bps in the quarter, but the percent leased increased 80 bps, suggesting that strong NOI growth will continue in the near-term. Leasing spreads were very strong at +8.4% on a cash basis, compared to -4.1% over the prior four quarters. We expect modest outperformance tomorrow due to the solid underlying fundamentals. We also believe that 2015 guidance being in line is a positive as many investors we have spoken with recently were expecting BDN to issue guidance below the street due to the negative impact of the recent debt and equity offerings.” 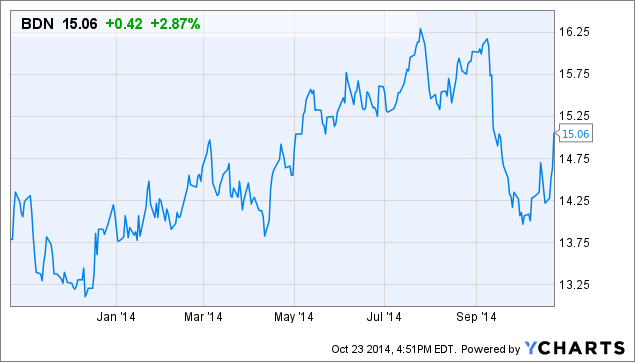