Intercept Pharmaceuticals Inc (NASDAQ:ICPT) shares climbed almost 10 percent in the last two days after the company’s competitor Genfit announced that its drug GFT505 had failed to meet its primary endpoint in non-alcoholic steatohepatitis (NASH), a form of liver damage caused by accumulation of fat.

Subsequently, MLV analyst Vernon Bernardino came out today with some mixed commentary on ICPT following the trial results. The analyst reiterated a Hold rating on the stock, with a price target of $273, which represents a slight downside potential from current levels.

Bernardino noted, “We believe the results preserve ICPT’s obeticholic acid (OCA) as the lead candidate in clinical development. However, we believe GOLDEN was positive overall and keep GFT505 close behind OCA, with both potentially in Ph 3 study by YE15. We believe upside potential and downside risk in ICPT stock evenly balanced, thus, we maintain our Hold rating.”

Furthermore, “We believe Genfit will capitalize on the activity, safety, lack of toxicity, and favorable effects on lipid parameters observed with 120mg GFT505 to gain approval to conduct a well-designed pivotal study, which Genfit believes will include histological endpoints and 1,500 patients. We look to gain further insight at the analyst event Genfit intends to hold during the 50th Annual Meeting of the European Association for the Study of the Liver (EASL) being held, April 22-26, 2015, in Vienna Austria.” 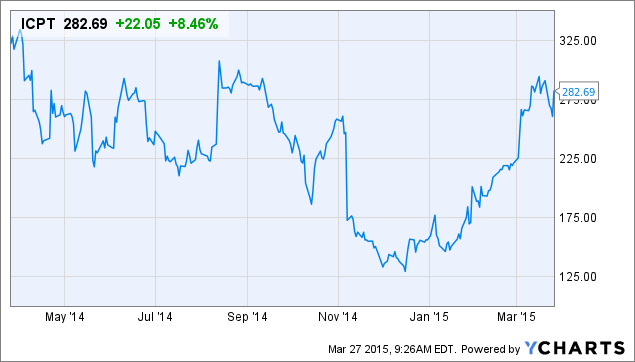