In a research note issued today, MLV analyst Jonathan Petersen maintained a Hold rating on Select Income (NYSE:SIR) with a $27 price target, following the company’s release of its third-quarter results.

Petersen wrote, “SIR reported 3Q14 Recurring FFO/share of $0.66, which was in line with our estimate and a penny below consensus. Occupancy remained unchanged sequentially, but same store NOI saw a decent +3.3% increase, on a cash basis. While fundamentals were fine, the pending acquisition of CCIT is what is driving SIR’s shares recently. On September 2, SIR announced that it has entered an agreement to purchase Cole Corporate Income Trust (CCIT) for $2.9B. We estimate the transaction will be about 15% dilutive to NAV, as the company is buying CCIT at a ~6.5% cap rate and SIR trades at a ~9% cap rate. However, the acquisition will be accretive to FFO as SIR plans to increase leverage to finance the transaction. The acquisition lowered the average age of SIR’s buildings, extended its lease terms, provided a higher level of investment grade rated tenants, and diversified its tenant base.”

The analyst continued, “As previously announced, SIR is under contract to acquire Cole Corporation Income Trust for $2.9B. The portfolio consists of 64 primarily net-leased single- tenant properties. After closing the transaction, SIR’s Hawaii portfolio will become much less relevant as all of CCIT properties are on the mainland. CCIT shareholders have the option of receiving $10.50 per share in cash, or 0.36 SIR shares ($8.74 on Friday’s close at $24.27, down from the $10.05 that was expected when the deal was announced when SIR traded at $27.90). However, shareholders can receive up to a maximum of 60% in cash, which we expect all shareholders will elect to do given where SIR currently trades.”

According to TipRanks.com, which measures analysts’ and bloggers’ success rate based on how their calls perform, analyst Jonathan Petersen has a total average return of 4.6% and a 68.8% success rate. Petersen is ranked #1354 out of 3364 analysts. 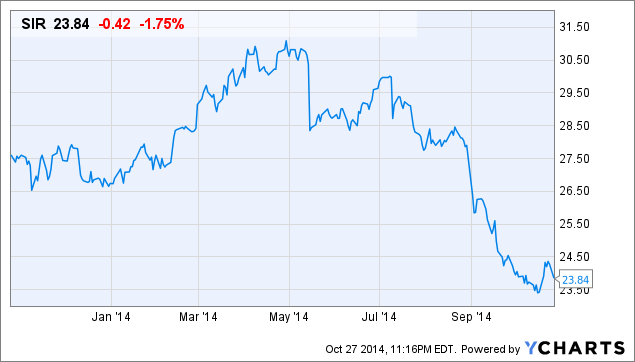