In a research report published this morning, MLV analyst Jonathan Petersen maintained a Hold rating on Prologis (NYSE:PLD) with a $44 price target, following the release of the company’s third-quarter results. PLD reported 3Q14 core FFO/share of $0.48, which was ahead of MLV’s estimate of $0.47 and consensus of $0.46.

Petersen wrote, “Management increased the low end of guidance by $0.03/sh, due to a higher occupancy range and same-store NOI now expected to come in at the high end of the previous range. Same-store NOI in 3Q14 moderated to +4.0%, from 5.1%, on a cash basis, but leasing spreads continue to accelerate toward double-digits and were +9.7% in 3Q14. Occupancy took its typical third quarter increase, up 40 bps, which was 10 bps ahead of our expectation — expect another occupancy pop next quarter as the fourth quarter is the highest occupancy quarter, historically. Expect modest outperformance today on the good print.”

According to TipRanks.com, which measures analysts’ and bloggers’ success rate based on how their calls perform, analyst Jonathan Petersen has a total average return of 3.8% and a 60% success rate. Petersen is ranked #1435 out of 3356 analysts. 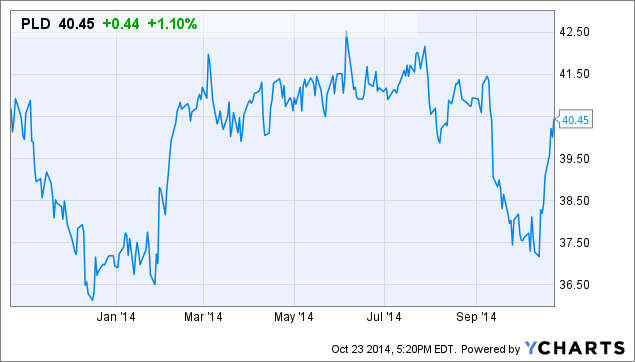