In a research report released yesterday, MLV analyst George Zavoico upgrades shares of Cytokinetics (NASDAQ:CYTK) from a Hold to a Buy rating and increased his price target to $9 (from $5), following the company’s release of its third-quarter results. CYTK reported a net loss of $6.0 million, or ($0.16) per share, and ended the quarter with $82.5 million in cash and total investments.

Zavoico wrote, “Most importantly, in our view, Cytokinetics completed a review of its Phase II BENEFIT-ALS trial results and concluded that one of the endpoints, slow vital capacity (SVC), provided meaningful clinical benefit. Following early discussions with the FDA, Cytokinetics is guiding to commencing a pivotal Phase III trial in amyotrophic lateral sclerosis (ALS) in 2015. In collaboration with Astellas Pharma (TYO:4503, not covered), Cytokinetics completed several Phase I trials with CK-107 that will inform the design of Phase II trials in a yet to be determined skeletal muscle disorder. Cytokinetics also reaffirmed its previous guidance of completing enrollment of COSMIC-HF, a Phase II trial of omecamtiv in heart failure, by year-end. Omecamtiv is being developed in partnership with Amgen, Inc. (NASDAQ:AMGN, not covered). With continued progress with all three drug candidates and its partners, and particularly with the enhanced likelihood of a Phase III trial in ALS beginning next year.” 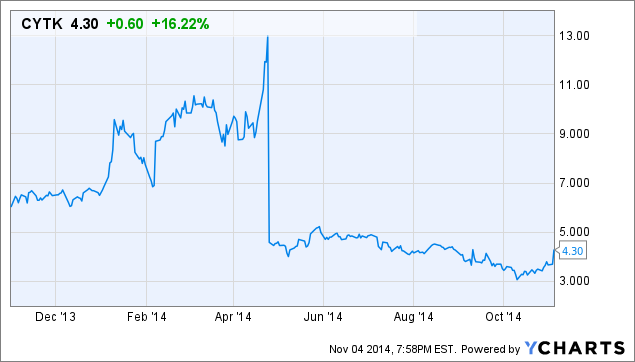